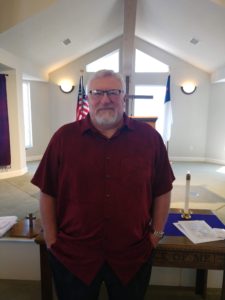 Tiki Island Chapel is pleased to welcome Fred Pratt as our Interim Pastor. Fred has been a deacon, elder, and teacher in several churches during his adult life. He has been ordained through several denominations during his ministry. Ordination includes youth pastor, Deacon, and Elder.

He began his business/corporate career out of high school in the field of data processing/IT, and continued in that field until the end of 2020. Fred began teaching in his early 20’s and taught high school, college and career, and young adults for 30 years. He is now the ordained teaching Elder at Tiki Island Chapel, and an ordained and commissioned uniformed Chaplain with the Galveston Police Department since 2015. Fred’s desire is for people to know God intimately and for them to have a deep understanding of His Word.

In his spare time, Fred enjoys reading, fishing, and cooking. He is a member of the “Gettin’ Sauced” BBQ cook team in the Galveston area.

Fred has been married to his first wife, Connie, since 1977. They have been on Tiki Island since 2008, and have been full timers since 2012. Fred and Connie have two grown children and seven grandchildren who live in the greater Houston area.

Please thank Fred for his continued service to our Chapel.