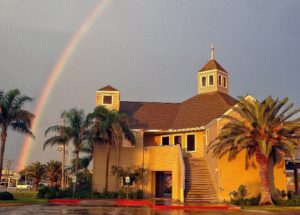 In the fall of 1995, God planted an idea in the hearts of several Tiki Island residents to be able to Worship in the midst of God’s beauty on Tiki Island. Following the Lord’s call, these people joined together to establish a church for the Island. By November 1995, the group was searching for the minister whom God had in mind for Tiki Island. And so began the history of Tiki Island Chapel.

In May 1996, the Lord led them to Dr. C. O. Magee, a guitar-playing pastor at a Presbyterian church in Galveston. His church allowed him to enter into a part-time contract with Tiki Island Chapel.

Tiki Island Chapel – finally more than a concept, held their first service on June 30, 1996, in a garage on Oahu Street with 74 joyful worshippers present. In September 1997, their services were moved to the meeting room in the Village’s Public Service Building. Land on Tiki Drive was then leased from Tiki Village. The Chapel was built and worship in the new chapel began July 15, 2001.

After Dr. Magee retired in 2009, Dr. Peter Holmes, a Tiki resident, filled the pulpit for many Sundays. He was then ordained as our Commissioned Lay Pastor in November 2010. Upon the departure of Dr. Holmes in 2015 we began a search which led us to Dr. Robert Murphy who led the chapel until his passing in 2019. After Dr. Murphy was called to heaven. Rev. Stephen Hill served the church until the Spring of 2021.

During an extended search for our next Pastor, Fred Pratt served as our Interim Pastor, and his wife, Connie Pratt, served for several years as the Administrator and Worship Director. We are so grateful for their servant leadership during that season.